A great sprint for stage one! No one would have predicted that result that’s for sure.

It looked like Ewan was just boxed in but was going to be finishing fastest. That gives confidence that he might be able to get a stage or two.

It will be interesting to see the fallout from the crashes. Everything came up Bernal apart from INEOS having to go off first tonight.
Thomas went down again and while there’s no damage falling off twice in a month can’t be good for your body.
What a stage for Jumbo. Teunissen takes the stage and Yellow but Groenewegen & Bennett both went down hard which will not only affect both of their individual chances for success but will also impact Kruijswijk’s chances as well as I think Jumbo will lose a lot of time tonight because of their injuries.
Fuglsang also hit hard and took a lot of skin off. I don’t see him being able to heal quick enough to not lose a chunk of time tonight & on stage 6.

Alaphilippe finally showed signs of cracking. He’s ridden really well thus far, surprising everyone. A couple of flat stages will give all GC riders a bit of a rest, unless there is strong crosswind. I think the 3 mountain stages back to back (18, 19, 20) is when we will see a change in Yellow. Thomas still a big chance, however Pinot is looking dangerous.

I’ve been surprised as much as anyone with Alaphilippe’s performance but the more you look at his improving performances over the last 2 years, including last years KOM win, maybe everyone underestimated him. His TT win was completely out of the blue though. He’s shown he can get over climbs with the best of them albeit not for 3 weeks in a row but the same was said of Simon Yates after last year’s Giro. The rest day came just at the right time for him.
Although I don’t think he will be in Yellow come Sunday when you break it down by stages there’s definitely a chance he will be.
16: No Time Loss/Possible Time Gain - Sprinters should take the stage with the GC contenders finishing together. If the wind is up then Quickstep are the most adept in utilising it to their advantage giving him the possibility of a time gain.
17: No Time Loss/Possible Time Gain - Breakaway to take the stage is what I see as being the most likely scenario. I can’t see all of the sprinters getting over the final climb so a very reduced bunch sprint is the other scenario. If it is the latter then the downhill into Gap is perfect for him to put time into the GC contenders.
18: Time Loss/No Time Loss - If he can remain within 2 minutes of the GC contenders over the top of the Galibier then he will make a minute back on the descent leaving him with a 1 minute lead overall. I expect him to attack on the descent of the Izoard so could start the Galibier ahead of the contenders.
19: No Time Loss/Possible Time Gain - It’s his kind of stage. The long recovery after the Iseran should see the contenders all finish together. If a breakaway doesn’t succeed then he could win the “sprint” at the finish thus gaining time.
20: Time Loss - This is where he will lose it. I can’t see his legs lasting the 32km climb that suits Pinot & Bernal down to a tee. At best he will have 3 minutes to play with though and if he does then it will be enough but I suspect he will have little more than a minute and that won’t be enough.

Overall, Pinot is in the best condition/form but I still think Bernal will take the overall simply because of Ineos’s strength.

Alaphillipe rode brilliantly last night. Just doing enough to stay in touch with the other favourites then attacking on the descent to play into his hands was brilliant. It didn’t make up any extra time but it was great to see the panache.

His ride reminds me of a Tour in the mid to late 00s (2006?) where Voeckler ended up in yellow a bit unexpectedly and was determined to defend it for as long as he could. He was really clever in picking up little bits and pieces of time at places that suited him and then doing just enough to stay on touch with the fully doped up riders around him on the other stages.

Wow. Feel a little bad for Alaphillipe as they’ve called the times at his worst position of the stage. Think he could have recovered somewhat on the descent. Changes the dynamic of tomorrow as well as all riders get some extra rest - think Bernal wins it from here.

I actually feel sorry for Kruijswijk most out of this. He looked like he had a fair bit left in the tank. Alaphillipe hadn’t made up much time on the descent at cancellation of the stage and he was so absolutely done by the summit. Another climb would have killed him.

Pity that final stage wasn’t longer as it made Val Thorens a bit of a fizzer. Still, Bernal earned that win and it’s hard to argue with the result. I would have liked to see Kruijswijk have a go to try to fight for second but it looks like he didn’t have it in him.

A team mate of Caleb Ewan and one of the big prospects, Bjorg Lambrecht, died after crashing at the Tour of Poland last night.

It’s shocking to hear. However I must say that it is amazing that there aren’t more frequent tragedies in cycling. As a motorbike commuter of 20 yrs, I’ve always worn full protective gear. Yet as a road cyclist of 6 yrs, I venture out with the somewhat ineffective cycling gear. And there is traffic passing way more frequently than when on motorbike. Yet I still do it. The love of two wheels rules.

Absolutely ridiculous stage in the Vuelta. It would have blown the legs for many of the contenders so the next 2 days are going to be fantastic.
Deceuninck Quick Step are Milos levels of unbelievable!

Rohan Dennis has signed for INEOS. If it’s possible for him to go to another level it’s with them.
I guess he approves of their TT bike.

Paris - Nice is live on SBS this year.
Ineos CCC, Mitchelton-Scott, Movistar, Astana (although their future is far from certain), UAE Team Emirates and Jumbo-Visma have all withdrawn due to COVID-19 but due the cancellation of the Italian races the remaining teams are stronger than normal. It may well end up being a completely batshit crazy edition of the race, if it makes it to the end.

Great stage last night with the cross winds and the short climb in the final. Always good racing at Paris Nice.

Shame about all of the missing Italian races. I hope the Belgian classics and Roubaix don’t end up affected.

Tour de France now planned for August to September. I’m curious how the different weather will play out: 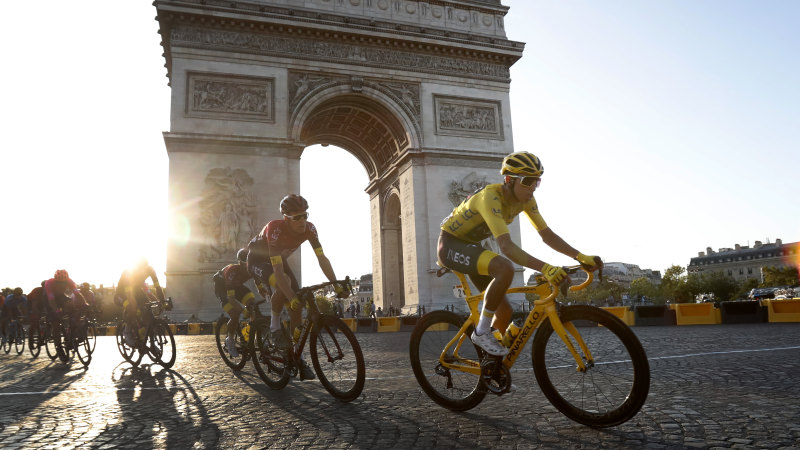 Cycling's governing body has rejigged the entire pro racing calendar to make the most of the sport's showpiece event.

Interested to see what they do with La Vuelta. It was supposed to be held in the north this year but will that be possible in November? Wouldn’t the snow cover be too heavy in the Basque mountains? It was only 7 degrees and pouring rain at the TdF in 2010 when I was on the Tourmalet so I can’t imagine how it & the Angliru summit finishes could go ahead as winter begins.

It was supposed to be held in the north this year but will that be possible in November?

I doubt it. I imagine it’ll just run from the end of September right through October and yeah there’ll probably be some weather issues but the Giro and other week long races deal with that on occasion.

Edit: Actually that’s when the Giro would usually run so who knows?

Sunweb have announced their Tour and Giro teams, and they have Matthews down as riding the Giro.

The full schedule was released a while ago but I only just had a look. I didn’t realize that essentially all of the spring classics overlap with the Giro. So he will not ride for any of his usual targets except Milan-Sanremo. Weird one, I’d guess it means he’s moving to a new team next year. 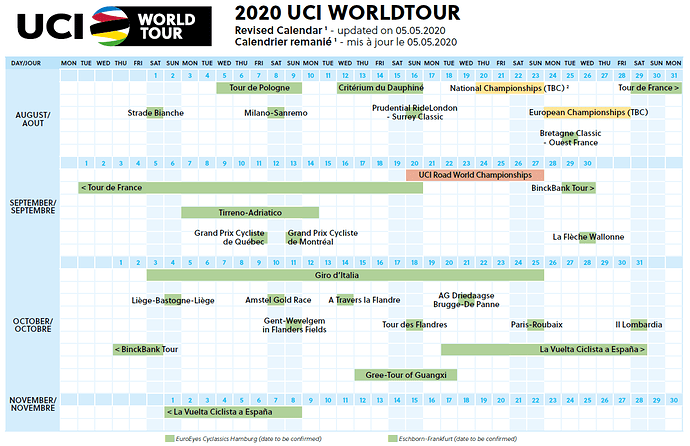 He’s under contract there for next season so it would take a big offer to get him to move.
With the classics on at the same time some of what would ordinarily be his competition for the Maglia Ciclamino will head that way instead clearing the way for him to have a very good crack at the Giro points title. Given Sunweb’s lack of a GC contender at the Giro (Kelderman?) I would say that they’re going down this route rather than the stronger Classic’s path.