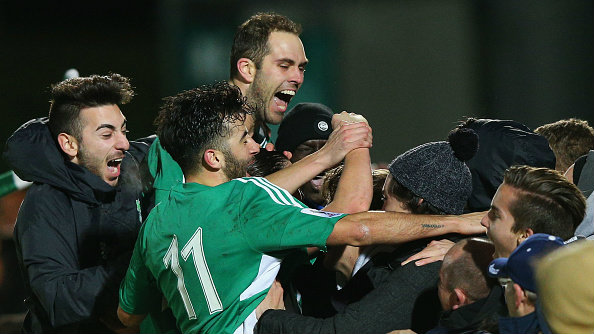 A national second division underneath the A-League is edging closer with proponents of the “Championship” saying they are 100% convinced it will happen by the 2020/21 A-League season.

I wish them well, but they’re living in a fairy land. Australia is a stupid expensive place to do anything, in particular sustain a viable 2nd tier comp with few prospects of decent income.

Yeah the only way to even vaguely make it work is some sort of conference model, which will disadvantage teams from more far-flung places, or having all the flights paid for by a sponsor, which won’t happen.

Short-term pain for long-term gain, the FFA is a bloated bureaucracy, stuffed with overpaid executives who produce fuck all and piss away money on junkets like there’s no tomorrow. They need to learn to live within their means.

Longer-term, a larger professional league system, ultimately with 30-32 teams across 2 divisions should drive up league income significantly and mitigate the drop in income from A-League TV revenue.

FFA have failed to grow the domestic game, they cannot be left in charge of it, and owning a club has to stop being a guaranteed money sink.

I have never understood how anyone thinks a second division is sustainable in Australia or how it would have any benefit to professional football here.

Ignoring the MLS model for the romantic notion of the European football set up is dangerous in my opinion.

Don’t they have a second division in the USA though?
In a similar model to what they are looking to do here?

I could probably research this, but I won’t. Too busy.

FFA is a bloated bureaucracy, stuffed with overpaid executives who produce fuck all and piss away money on junkets like there’s no tomorrow. They need to learn to live within their means.

I agree on this, but it requires protection of a bunch of programs overseen by these wasters.
By this I don’t mean the Socceroos, rather the less profitable ones such as various youth teams, women’s teams etc.

Agreed. I don’t see how relegation in australia wouldn’t kill a team.
The mariners would fold and be dead if we had relegation.
The only thing keeping them alive at the moment is the fact that they can’t be.

I can’t imagine how well teams in a second division would survive having to fly to and from Perth every second week if there was a team from WA in there.

Agreed. I don’t see how relegation in australia wouldn’t kill a team.
The mariners would fold and be dead if we had relegation.

100%. No HAL franchise will survive in a second division, Aussie Joe Public is just not conditioned to give a fuck about watching a second tier.

All the pundits who bang on about P&R being a positive, in that example making CCM lift so they don’t suffer the fate, don’t then consider the consequences for who does end up going down.

Imagine Charlesworth removes the cobwebs from his wallet and we end up with say Brisbane going down instead? We end up with the HAL having no team from a QLD market, instead they’ve been replaced by a promoted Bentleigh Greens playing in front of 1,000 people and that one horrific mullet. That in turn devalues the league, future TV rights deals etc.

Not to mention we’ve already scorched the earth in the 4? next biggest markets (Auckland, Gold Coast, North Queensland and fuck it I’m adding Canberra who get shafted in every expansion and are apparently fuming). We simply can’t afford to lose another one, especially when we’re likely to be carrying two new franchises for some time (both have been chosen due to their long term growth corridors and won’t be giving the league any honeymoon period sugarhit like Wests did).

As well as clubs going bust with relegation because its not our sporting culture to care about a second division, a Darwin vs Hobart fixture is not exactly going to be met with excitement by TV deals.

The idea of a second div like in America thats used to promote teams from as expansion makes some sense if its conference based to take into account Australias geography. But I just feel the people obsessed with pro/rel are the same who think United/Athletic/City are the only names for a football club because tis European

Or, in the case of those on the 442 forums, think the A-League should never have existed.

The mariners would fold and be dead if we had relegation.

Mariners will fold and be dead within 5 years without relegation.

The success of early seasons is increasingly a distant memory. Over the last five seasons, Mariners have gone into the majority of their games more than 3 points outside the finals. That’s quite a feat when you consider that it takes 3-4 games (10-15% of the season) for this to even become theoretically possible (i.e. 6 different teams get to 4 points). The majority of games are purely for pride, with nothing to hope for and nothing on the line.

How long do people imagine professional clubs can be sustainable and retain interest when they rarely if ever play meaningful games? Particularly when the league rules force them to piss away so much money to overpay players that don’t want to be there (largely for aforementioned reasons) just to meet a salary floor that exists to perpetuate the delusion of “equality”.

The status quo is fucked for small teams. Unless the league significantly cuts down the salary cap concessions (second marquee, loyalty/homegrown exceptions, cap banking, depth from out-of-cap NYL scholarships enabling smaller top-heavy squads) to reign in affluent established clubs like SFC and MV and restore some real equality; or alternatively extends itself into the truly farcical with 8-team finals series for 12/14 team comps; it is inevitable that teams at the tail of the competition will perennially struggle.

At least P&R would give them something to play for every year; and potentially the opportunity to downsize to a sustainable level in a lower tier if HAL ceases to become viable, rather than the only two options being HAL or folding.

I’m sure football fans in Gold Coast or Townsville or Hobart would prefer having a professional second division team than none at all.

The group pushing P&R is mostly made up of clubs who would never get entry into the A-league without it, ie most of the old NSL clubs and current NPL clubs.

FFA has only ever been interested in new franchises/clubs. The newly formed FFA board maintained that thinking even though they kept Sth Melb hanging in there. I can’t see the current A-League clubs that are overseeing the new operating model changing that given what a new club/new cashed up owner brings to the table vs an old NSL/NPL club.

P&R is their only road in and they don’t care whether it works or not or kills other clubs or not. They have nothing to lose in that regard and everything to gain. They’ll pull the A-league down in the long run if it means they get a chance at it in the short run.

How long do people imagine professional clubs can be sustainable and retain interest when they rarely if ever play meaningful games?

You realize that 60% of the premier league is pretty much this?

You realize that 60% of the premier league is pretty much this?

How many teams in today’s EPL have really not, at any point in the last few years, been involved in a battle for any one of:

I don’t watch the A-League to see is us avoid the wooden spoon.

I don’t watch the A-League to see us win a spot in Asia.

Hell, I don’t even really care about being first past the post.

I watch the A-League to see Sydney FC win the Grand Final.

That is a fairly typical Australian sporting point of view.

Do any East fans really care if the Roosters won or lost that game they played against whoever they played in England this month?

There is a romance to promotion and relegation that ignores many, many issues that P&R would present.

Has anyone ever actually presented a bone-fide funding model for a 2nd division? And a time line to change the mentality of the Australian sporting public?

The last I recall there is about 96 teams in the English professional model. At any time about 2 of those teams have a chance at winning The Premiership. The rest just make up the base of a very large pyramid.

Imagine being a Yeovil fan! Keep the dream alive, we too can win The Premiership!

Want to kill the A-League? Promotion and Relegation and scrap the salary cap. Sure fire.

Yeah I totally agree it’s not the way we do things here and whilst it may get some European football fans interested it’s not going to get the broader public interested.

The US follows their sporting culture which similarly doesn’t like pro/ rep, has a grand final as the pinnacle and a conference system. Similarly the English county cricket circuit has pro/rel because thats an engrained sporting trait there.

It sounds like a professional second tier would be set up before any P&R. That would give a sense of how willing the Australian sporting public is to follow a second tier club. I imagine that if they find no one is watching or turning up, the A-League powers that be wouldn’t go ahead with it.

It sounds like a professional second tier would be set up before any P&R.

Pretty hard to do P&R without a 2nd tier, no?