Thought there wasn’t one on here but missed it.

Can we all just accept he’s good enough now and won us a few points this season?

Yep he’s a top five keeper in the league and while he isn’t Vukovic, he is comfortably good enough for this club.

Yep he’s a top five keeper in the league and while he isn’t Vukovic, he is comfortably good enough for this club.

Let’s just not let him know that but, ok? The longer he thinks he has to keep playing out of his skin to win our approval the better.

Also, John Crawley is a magician.

I’ve never been a huge fan but he’s saved us 6 points now.

Without them we’d currently be 5th.

He has surely silenced the critics. Super bit of business trading him with Vedran

Plus a massive couple of saves against Perth in December.

Any goalkeeper that came in after Vukovic was going to be a step down, but Redmayne is a perfectly solid A-League level keeper week in week out, and since he’s come to the good side of town he’s having quality games far more often than the dud games.

Most teams in the league run with a perfectly solid A-League level keeper and are lucky to have one that stands out especially so much as Vukovic does.

Redmayne has always been alright by me (although I was surprised and annoyed when he first signed. Soon got over that). 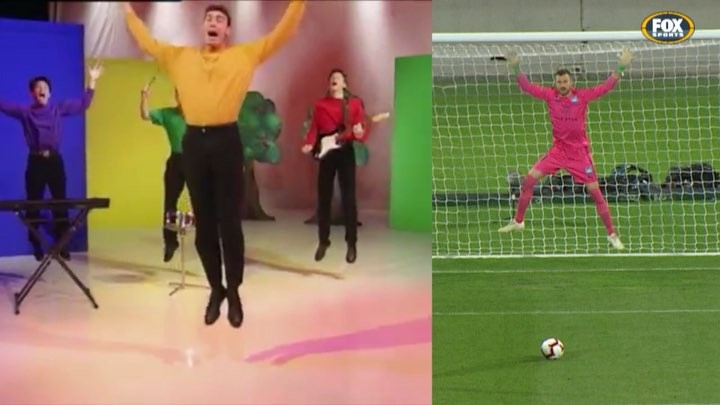 I missed the first half, and can only recall that one point blank save vs Athiou late on. Did he have much else to do? Just looking at the stats on fotmob and they apparently only had 2 shots on target all game(?) That sounds odd to me, but perhaps Troisis’s goal was actually going wide - hey it was Troisis’s after all.

Yeah he didn’t have much to do from that perspective. He did bat away a few decent crosses though. I can’t think of an error he made that wasn’t a wayward pass.

In the words of Bradley C Stubbs - BELIEF IS POWERFUL.

Seeing him go from bad form at WSW to performing for us in the top 3 really says a lot about how strong he is mentally, how well the team environment suits him, and how well Crawley works him.

Yeah I was referencing that save. Seemed at the time a big save

What a game from him.

Been excellent in 2019. Vuka levels this year, after a more average first half of the season.

If you add 2 points saved today thats 8 hes got us and Im sure theres some big saves earlier in the season we forgot.

He seems to be a massive confidence player. I remember against Perth away he was horrible and the home match before that where he almost had a habit of making himself small. Since then though his confidence has been up and he is almost unbeatable. Hope it continues for him…and us!

The one irritation about him is his kicking game. He seems to find the sideline with more than 50% of his goal kicks.

I was a large critic earlier in the year but apart from the above issue, I eat my words. He’s been huge this season!

Redmayne’s form has really picked up since Warland and Wilko have been established as the prime CB pairing. That, as much as anything, seems to dictate his confidence, and that difference is more noticeable than a lot of keepers. He was super shaky earlier in the season when it was Jop and Wilko in the middle, and not much better when Calver replaced Jop.

Since Warland has come back, we’ve won 4 games out of 5, kept clean sheets in 3 of them and Redmayne has made key saves in at least 3 of those wins. Having that bit of extra solidity is really helping.

Crawley deserves a ton of credit as well for turning one of the weakest starting keepers in the league to someone who is at least on par with most of the other starters in the league, in that they can be occasionally ordinary but also can from time to time be fantastic. That’s not something I’d have considered possible for Redmayne a couple of years ago.

its funny with the kicking, sometimes you can’t ever get it sorted. I remember playing with a guy when I was a teenager. he was an amazing keeper, would make saves you thought were impossible. But when he had the ball in his hands to kick it out you had no idea where it was going to go. it was hilarious.

Recently refereed him playing 10 years later and his kicking was still a complete lottery.