I don’t think Wellington is going to sit back and park the bus. Bobo should be benched for this game.

But that depends on injuries. Are ninkovic and Alfie even playing?

Bobo will be rested,he can sit in the stand next to Zullo,both can be back in a week!
The cup game against Roar will be a good time to use Bobo off the bench when some tap ins are required.

I believe their icing is precautionary.

Anything but a win is unacceptable. It’s a must win fixture.

A clean sheet, multi goal win is a must to help kick start our season, although I feel if we do win, it’ll be a scrappy 1-0 thing. If we play like we did on the first half against Newcastle we should win comfortably. We can’t afford a second half performance like that, let alone a 90 minute performance like we put in aga o nest the Mariners.

Play a mixed NPL/A-league squad and focus on FFA CUP, no relegation and cup allows us for a Champions League/AFC Cup spot.

Doubt the NPL boys will perform any worse than the first teamers’ as of late.

I thought we were pretty good in the second part of the first half and much of the second half. Birrigitti seemed to make more important saves than Redders and Alf could easily have had 2 good goals on any other day. Even the top teams are losing games, there is plenty of time to build momentum and make a big run.

As for NPL boys, our younger players were among those who had very weak games vs CCM. VDS had an absolute shocker (once again), King was very weak defensively, Wood’s decision making was often off (eg when shooting). Only Yazbek, for mine, looked like he fitted at this level. (Talbot was on the opposite side of the stadium from where I was sitting and did not really notice him much)

I am really hoping that Hof is ready to play again and would have him and Yazbek as 2 DMs. They are much more akin to Brillante/Bratten and O’Neill than Retre and Caceres.

Call it a slow start, a slump, a trend or a trough. If Sydney can’t beat a battered Wellington Phoenix on Sunday afternoon, then practically one-fifth of the season will have passed and the table won’t lie. Sydney are short-priced favourites. Frankly, it’s hard to see why …

Ins and Outs aren’t being published regularly this season, unfortunately. I’ll try to update with squads if/as they are confirmed.

Maybe it will be like amatuer football where you have to wait and see who shows up before deciding the team.

And if enough players on one team don’t turn up, the other team loans them a few.

Thanks. Now that you’ve put that thought into the aether, the football gods will definitely conspire to put Sotirio in sky blue.

Now that you’ve put that thought into the aether, the football gods will definitely conspire to put Sotirio in sky blue.

What if I told you that already happened and his name is Kamsoba.

What the fuck are those glasses?

He’s fooling no one…

No wonder his passings been a bit off. 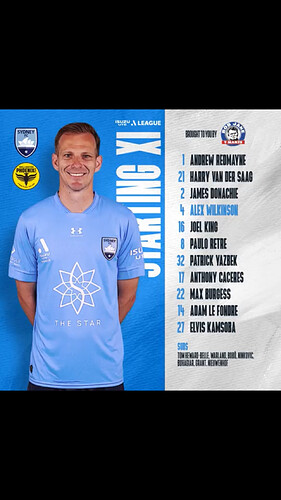 I guess that’s some interesting changes

One of the only bright lights last week