Toughest game of the group up first. They beat Jeonbuk 2-1 last time around but were definitely the better team.

As always with ACL away games, I’ll take a draw.

After not playing for 2 weeks, what a great match to get rid of the rust …

Arse blast the rust away.

Yokohama F****** Mariners, all your bases are belong to us!

It would be nice to see us really stick it up Ange and get a win. What is their defence like? I know they will probably have more possession but maybe we can make chances on the break.

Just based on their Jeonbuk game, the keeper was making a huge number of errors/ridiculous decisions but the rest of the defence was pretty solid.

I know they will probably have more possession but maybe we can make chances on the break.

That’s basically what we’ve been setting up for and playing like all season. Granted they are different level to a-league teams but still. We’ve been planning for this. Or so it seems.

It means “sailors” in Spanish. That and they merged with a team called Yokohoma Flugels which, being a team formed by an airline, adopted the name as it’s German for “wings”

Excited for this one! Interested to see how dynamic we can be without Ninko. Is Baumjohann back for this match? It goes without saying that we need a good performance. If we do, no reason why we can’t match them. I have found us to be slow from the start after our bye/spells this season, so can’t help but think the big gap may not help us here.

ABJ seems to be there based on his twitter.

On Yokohama, watched a few of their games over the last few months, theyre prone to a fuck up or two at the back if you press their defenders. If Kosta and Alfie work hard up front i think we can steal a win.

ABJ seems to be there based on his twitter.

Seems wise to send him straight there from Germany, guess that would have been the plan all along given he would’ve been suspended for the derby anyways.

Hopefully his mind is back on the job, still think his better performances for us so far have been when Milos was out, if he can produce that level and release the two ahead of him we’re in with a shout.

i saw a youtube video on the Sydney FC channel like 1 week ago at least, i think pre derby, and i swear i saw him back at training already even then, not sure if he was over there for that long (unless someone knows any better).

I’ve forgotten what it’s even like to follow an A-League team.
We’re going to be rusty AF aren’t we?

Yes,he was back training.I saw that.

This is going to be tough to watch. 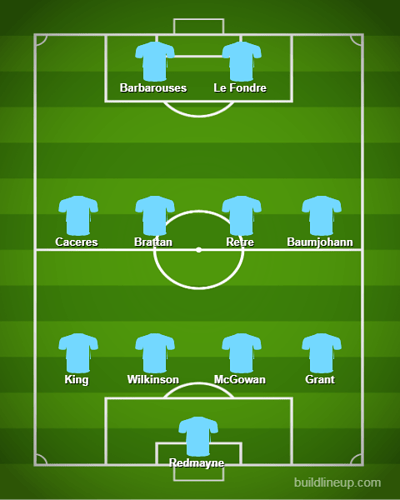 These two clubs have never played

Most Appearances in ACL – Brandon O’Neill (17)

It’s going to be an enormous challenge for players like King and Retre.

I think we can win this, but they’re really going to have to tell our left side attacker (presumably Caceres) to drop and double up on Nakagawa otherwise he’ll kill us.