Thought Id get a spin off of the memory thread for some more nostalgia. This thread isnt for your Ninkos, Del Pieros or Brosque. Instead I thought itll be fun to pay homage to some lesser known players who gave us some good memories. I talking Ibrahima Thiam’s trial period, Gan’s belter to put us 2-0 up after 5 against Victory or Chris Payne’s goal against the Nux in a semi (under dubious circumstances).

Though Patrick has to be my all time favourite bit part player/cult hero. It may just have been the song.

Just rename the Ibrahima Thiam thread and stop messing around.

Should have said in the thread please do provide youtubes if possible.

Ian Tall guy has had the most famous unsuccessful trial in football history. We are still talking about it

Michael Enfield always had a great attitude when he was with us, just a shame he copped a nasty injury. However he did enough to get inducted into the Southern California Jewish Sports Hall of Fame!

Didn’t Biddle get into a bit of handbags with Beckham at that LA Galaxy game or did he just lay a bad tackle on him. That game was so long ago that my memory of it is in black and white with Paul Williams commentating.

The Rank Despot. I don’t know why but from the moment he signed I had stupidly high expectations of a player I had never heard of. Maybe it was the name, maybe it was because he was a product of the incredibly successful refer a friend player recruitment strategy the club was employing at the time, I don’t know.
What I do know though is that he vindicated my opinion of him almost immediately when he came off the bench and scored a 90th minute winner against Wellington in his first game. I gave him my scarf after that game in an impromptu on field presentation.

Now when I think back to that moment my brain has merged Ranko and Bruno into the one character. Damn remakes.

*Post edited to include Ranko’s name at the start of the 2nd paragraph.

I’ve long dedicated my profile picture to the great man.

Patrick will always be that player that should never be forgotten. Wasn’t very good but so much heart. I still remember the game where we were down and demanded Patrick go on the field. It was set up for the most amazing of amazing scenes…and he didn’t help at all… ahh the memories. I still have no clue what game it was, what the score was or who we were playing, but all I remember is the whole Cove chanting “we want Patrick”

Yeah I remember going down to Wollongong for his first match with us (apparently he paid his own way to trial). Came off the bench and dominated, I think he scored one and set one up.

I ran into him and Patrick on a night out in the Rocks when they were both injured and Sydney was away in Wellington (must’ve been Nov 2007). I don’t remember much of the conversation but he never played for us again, despite staying another season

If only because of his name, Ranko Despotovic should be remembered as a club legend but if you want more - his was the first goal in the 0-5 defeat of MVFC away in 2014. 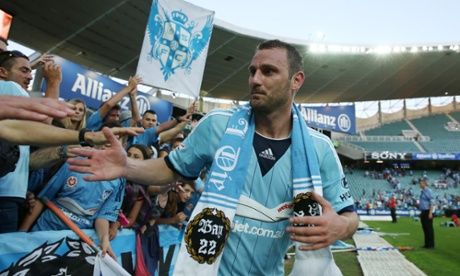 Ibrahima Thiam (born 20 August 1981 in Senegal) is a Senegalese retired footballer. He considers himself to be a target man. Working out on an agreement with PFC Dobrudzha during preseason 2002/03, Thiam finished the season with one goal as Dobrudzha dispatched Botev Plovdiv 3-0. Despite interest from Beroe, he disappeared from Bulgaria without knowledge from the Dobrudzha officials. Garnering interest from Strømsgodset Toppfotball and invited to their training camp, the Senegal youth interna...

What a career… some great facts

Also “He is married to a Flemish woman”

and, most surprisingly “He considers himself to be a target man”

When he nutmegged Dean Heffernan before scoring in the 5-4 game against CCM? Sure.

That feeling immediately evaporated when I watched Craig Moore outpace him right in front of me. Being a winger, pace is kind of important …

Came on as a sub in the 3-1 win over WSW in 2014. Ball rolled across his arm (or appeared to) and Polenz, while in the penalty box, caught the ball expecting the ref to blow for handball but instead conceded a penalty for hand ball himself. Genius. Abbas steps up to the spot…

Loved Ranko. Geniune poacher who would have easily been a 12+ goal a season if he stuck around and played in a more functional team

Was a big fan of the despot.

Came on as a sub in the 3-1 win over WSW in 2014. Ball rolled across his arm (or appeared to) and Polenz, while in the penalty box, caught the ball expecting the ref to blow for handball but instead conceded a penalty for hand ball himself. Genius. Abbas steps up to the spot…

Didn’t he score against us when playing for Rockdale in the Cup?

Alex Mullen is one of the more obscure players for us in recent years and yet I remember him being a solid no nonsense midfielder. He had a couple of sub appearances in that successful ACL campaign.

I really liked Ranko. Genuine near post poacher plus a lot more. Having him, Garcia and ADP as well as Nick Carle; we should have done so much better had we not had Farina.